The Arena is the Laifubot Player versus Player (PvP) mode 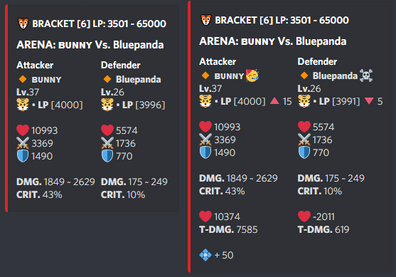 The Arena is an automated PvP battle system that pits you against another player in the same bracket as you.

a.  Damage is dealt on a “same instance” basis. Both players hit and take damage at the same time.

b.  Winner is decided by the following conditions :

- If one player dies, the living player wins.

- If both players die at the same time, the player who deals the most total damage wins.

- If both players live at the end, the player with the highest remaining HP wins.

c. All attacks have a low roll and a high roll, as well as the chance to land a critical strike. This gives the battles more of a dynamic feel.

- Critical Strike Chance is at a base 10%, scaling up by 3% by each level a player is higher than their opponent.

Stats for PvP can be earned in two ways:

a. Level Up, which grants a flat stat increase.

b. Bloodlust, which has a chance (15%) to occur when redeeming a drop code while you have enough Nightmares.

- Bloodlust : You gain a random amount of stats (within a range) across HP, ATK, and DEF stats.

- Every time you redeem a drop file, you gain experience and have a chance (15%) to gain Bloodlust, if you are able to expend 50 Nightmares.

- You can gain 500 Nightmares for every 15 characters burned.

a. Tickets to enter the Arena are earned via Daily command. (3x tickets a day)

b.  Having 11 or more unused Arena tickets will cause you to lose rank points every day (5 a day).

This currency is known as Upgrade Materials. "We call em blue stuff" - 9𝔱𝔥Law †

There are 6 Arena brackets with them each having its own reward set of bonuses or amount of upgrade material. 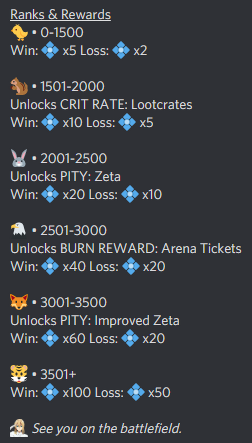 Unlocks: Upgraded Pity Zeta (Guaranteed Zeta after not rolling a Zeta/Ultra after even smaller number of gacha rolls/stones used)