The final part of the Character Management trio is Favorites and Wishlists. 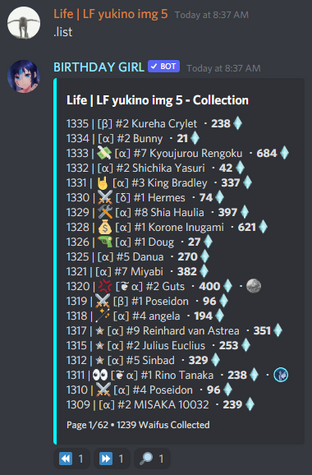 When you do the .list command you will see that some characters have emoji's on them and some do not. This is known as Favoriting.

There are 2 primary commands when it comes to favorites in the LaifuBot.

.fav [UniqueID] - This command will either favorite a character with the default heart emoji to remove it from the burn list or remove it from being on the favorites list.

.fav [UniqueID] Emoji - This command will favorite a character with a unique default discord emoji of your choosing. If the character already has an emoji whether it is the default one or not, it will be replaced by the newer emoji selected.

Favorites Usage in the Server 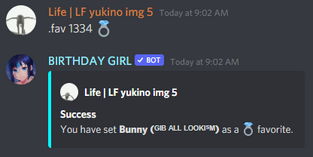 As you can see, these are the messages from LaifuBot that you will get when you favorite or unfavorite a character from your inventory list using their Unique ID.

The only limitation at the moment for what can be used to favorite characters are the discord default emojis. 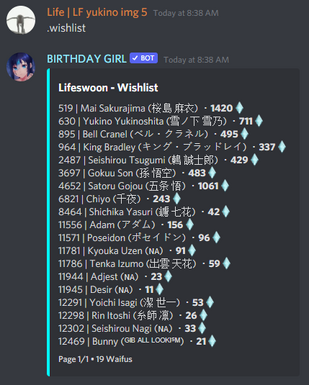 Have you ever seen a character in the server and decided you wanted to get them? Well, you can do something called Wishlisting. A wishlist is a list of characters, sorted by numerical Global ID, that you use to manage what characters you want to look for.

There are 5 primary commands when it comes to wishlists in the LaifuBot.

.wishlist - This command allows the player to see the characters they currently have on their wishlist.

.wishlist -add [Global ID] - This command allows the player to add a character they want onto their wishlist.

.wishlist -remove [Global ID] - This command allows the player to remove a character they do not want on their wishlist.

.wishlist -user @User - This command also allows the player to see other players wishlist of wanted characters they want using their discord tag. 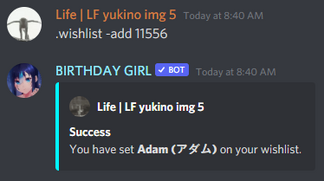 Wishlist Usage in the Server : 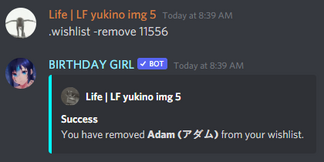 These are the LaifuBot messages when adding and removing specific characters from your wishlist via Global ID. 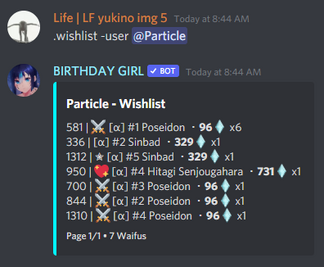 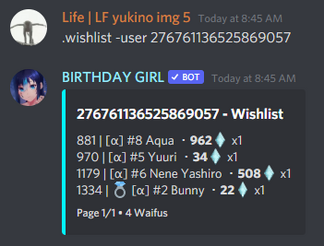 These are the LaifuBot messages when you are checking another player's wishlist whether is it by their Discord @User or the User ID.

When you use the .wishlist -user command on another player, it will show you the characters that player wants and has on their wishlist from YOUR inventory.

Example : I have an Aqua that the bottom-right user has on their wishlist as a character they want.

In the wishlist, it also shows you the Unique ID of each character they are looking for as well as the number of those specific characters you own if you have more than one that is the same rarity and image.