The second pillar of Character Management is the Search Functionality. 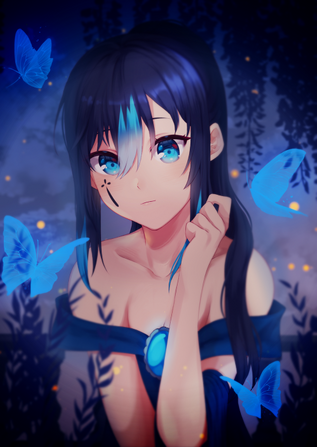 There are multiple ways to search either a specific character or series in the LaifuBot. It can be done via the name of the character, name of the series, character GID, or series ID.

The following commands will do those exact jobs:

.clu -name : This command will search for a character using the specific name given.

.info [GID] : This command will search for a character using the Global ID of the character specified.

.clu -series : This command will search for a series using the specific keywords given.

.slu [Keyword] : This command will search for a Series ID using the specific series name given.

.scompletion [SID] : This command will show the player what characters are missing to complete a set of a given series.

.bcompletion : This command will show the player what badges they are missing from the full badge set.

.blu : This command will show you a specific badge, or the general list of badges if a Badge ID is not specified.

.top : This command will show the Top 500 Characters in the LaifuBot, starting from the highest 1-20.

Now that we know what each command does, we can view how they are used. 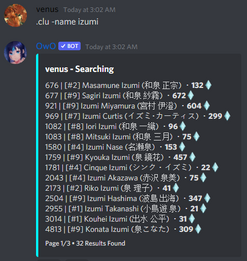 As you can see, it shows all characters with the name Izumi on a list with their Global ID's to the left.

It stacks them in Global ID numerical order from the oldest to the newest.

This shows all information on a specific character.

-The Main Series that character is from in both the English and Japanese Name.

-The Series ID, along with any associated badges of the same series.

-The Influence value of the character, along with what rank in the bot this specific character is.

-The Total Collection count of this character in all regular Gacha-able rarities.

-The IMG and IMG# at the bottom. This you can click the left or right arrows underneath to see each image.

-Please keep in mind as well that not ALL character have a full set of 9 images, either due to being a strictly manga series, or having little to no official art. 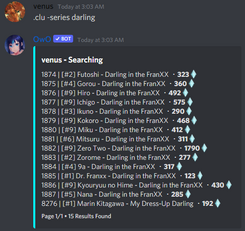 Similar to the clu -name command, this shows all characters with the series name darling on a list with their Global ID's to the left.

-This can include multiple different series as well, if it has the same keywords for the series. Example being using the keyword "darling" it brings up characters for both the "Darling in the Franxx" and "My Dress-Up Darling." 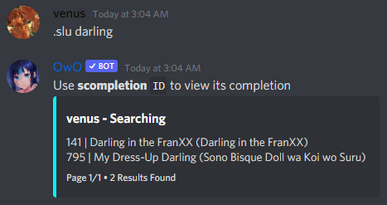 This command is a mix of clu -name and clu -series. By using a keyword, "darling" in this case, it shows all Series with their Series ID in a list ordered from the oldest to the newest. This goes hand-in-hand usually with the following scompletion command. 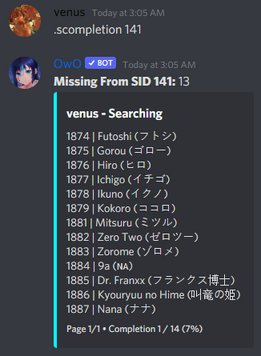 As stated in the previous command, this will be used with a Series ID to show the player how many and the names of specific characters in English and Japanese along with their Global ID's that are missing to complete a series set.

A set can be any assortment of rarities as long as the Global ID of that character is present in the inventory list. It will even show you the % of characters at the bottom. 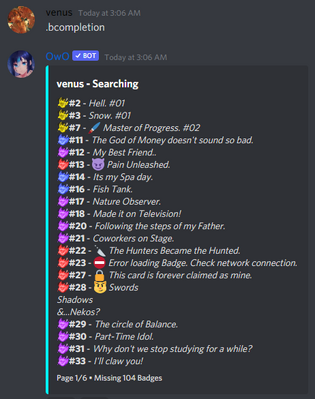 These commands are very simple really.

It just shows the player all the badges that are missing from their inventory/rewardbox to complete the all badge set.

BLU is just a search command that uses Badge ID numbers to view badges information, similar to the .info command. 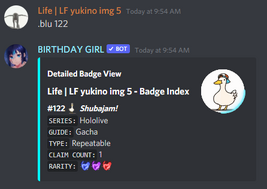 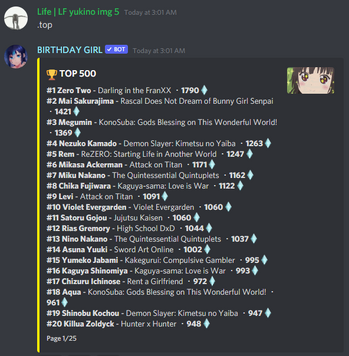 As explained in the top line description of the command, this shows the Top 500 characters in LaifuBot.

It shows what specific characters rank is using the Influence value of the character.

The series that character is from is also shown between the name and Influence value.

Rarity value does not hold weight when it comes to rank in the Top 500 as it is based purely on raw Influence value.